You are using an unsupported browser. Please update your browser to the latest version on or before July 31, 2020.

How do I see statistics behind my email campaign?

This article goes through where to view the statistics on your campaign & what all the numbers mean.

If you would like some assistance with improving your email campaigns with MyGuestlist, want to improve your open rate or just some advice on the subject line and content of your email, send an email over to Courtney(courtney@myguestlist.com) who will be more than happy to give you some suggestions or completely overhaul everything you're doing to improve all aspects of your marketing!

3. From here you can filter sent items to view information on certain email campaigns sent.

You can filter by date or by the type of campaign that was sent, such as automated messages or email campaigns. 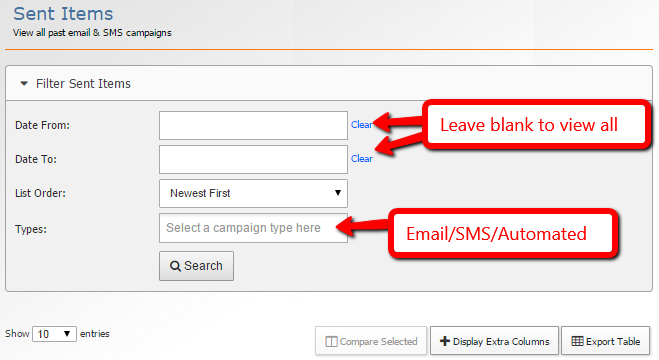 By clicking on the

icon, a new window will open showing the campaign report.

The campaign report displays the emails opened, bounced and unread.

The average open rate for the hospitality industry is around 7-10%.

Below we've got an email campaign that has done much better than the average, so I've put a brief description of each value and what you can possibly to to improve it: The total emails sent updates for you as it's getting sent out.

The open rate for this campaign was 23.3% (which is quite good considering the average is around 7-10%!)

Keep in mind, the open rate isn't the only thing that matters in a campaign.

The number of emails bounce was 5% & this includes:

The number of emails unread was 72.9% - this number can be decreased by simply doing more targeted campaigns such as only emailing people about they interests or other fields you have in your database.

The total number of people who opted out after opening the campaign was only 1% of everyone who opened it.

And 12% of the people who opened the campaign clicked on a link (content is important!)

The total number of people who were opted out was 22, but only 12 of these were people clicking the opt out button, and the other 10 were automatically opted out due to permanent bounces (usually meaning the email no longer exists or is incorrect).

By scrolling down a bit down the page, you'll see some tables which give you more detailed information about:

- Which links were clicked, and how many times

- Which patrons clicked on which link

- The patrons who opened their emails and at what time

- Which devices were used to view the email (it is important to know how your patrons view your email! If a larger number of people view it on mobile, you should consider getting a mobile friendly template).

- Which browsers were used to view the email

- Which system the patron was using when they viewed your email

- Which patrons asked to be opted out

- The patrons that we received a bounce from (if we got an out of office, email inbox is full or their email address doesn't exist).